My interest in medieval crime and execution has led to many an interesting late night Google search. One person whose name kept popping up is that of an obscure chap called Murcod Ballagh. According to some websites he is the first known victim of Madame Guillotine. In spite of being intrigued by Murcod, I never bothered checking to see if there was any historical foundation to this claim.

The websites and books that record Murcod Ballagh's execution all use the same source: Holenshed's Chronicle. Many of you will be familiar with Holenshed, Shakespeare swiped the plots of lots of his plays from this chronicle. Richard Stanihurst, a sixteenth century poet and historian from Dublin, contributed to the chronicle and was responsible for the Irish material. What he has to say about Murcod isn't in itself that unusual. He tells us that Murcod was decapitated by David de Caunteton in 1307. It is the woodcuts that accompany the text that are really interesting. Poor Murcod is depicted being executed on an early prototype of a guillotine. 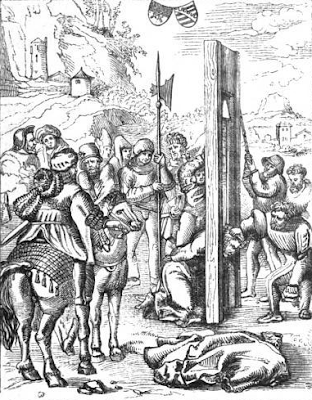 A few weeks ago I decided to go hunting for Murcod. I was writing an article on execution, and I decided to check and see if he turns up in the contemporary sources. In short, yes, he does! He is mentioned in the justiciary rolls in January 1308, when David de Caunteton received twelve marks, seven shillings and eight pence as a reward for killing him. De Caunteton did not act alone though, he was simply an accomplice of Edmund le Botiller. Here's the first part of the relevant entry that can be found in the published Justiciary Rolls 1308-14, p. 22:

Yet of Common Pleas at Dublin before John Wogan, Justiciar, year and day as above. [20 January 1308]

The custos of the liberty of Wexford was commanded that he levy twenty marks of the lands and chattels of the community of the liberty aforesaid in his bailiwick, and cause Edmund le Botiller or David de Cauntetoun his assignee to have them without delay, in part payment of the hundred marks which are due to Edmund from the liberty aforesaid and the liberty of Kilkenny, and also from the counties of Dublin, Carlow and Kildare, for the capture of Morghuth Ballagh McMorghuth, felon, whom Edmund killed, and that he should summon, etc., here on this day.

This plea roll reveals that Murcod was one of the MacMurroughs (yes, trust me, McMorghuth is MacMurrough), descendants of Diarmait MacMurrough, king of Leinster, who played such a key part in the English invasion of Ireland. The MacMurroughs had gone a bit quiet in the thirteenth century, but were beginning to assert themselves again. Murcod must have been a major troublemaker if the administration expected the communities of not only Wexford and Kilkenny, where the MacMurroughs were based, but also Dublin, Carlow and Kildare, to reward le Botiller (Butler) and de Caunteton. Obviously, the MacMurroughs were attacking areas further away from their own locality if Dubliners were expected to cough up for his killing.

The editors of the justiciary rolls assume that Edmund le Botiller is the same person who served as justiciar of Ireland (see Calendar Justiciary Rolls, 1308-14, p. 335), but (in my opinion) it is much more likely that he is the rector of Tullow mentioned in Clyn's Annals of Ireland (p. 176). In 1323, Edmund, with the help of the Cauntetons, killed Philip Taloun, his son and about twenty six of the Uí Chodlatáin, and burnt down the church at Taghmolyn, in county Carlow, with men, women and children still inside. Oh dear.

Murcod is also mentioned in the annals of Thady Dowling, where he is described as being 'princips Lagenie', that is, prince of Leinster, which is further confirmation that he was one of the MacMurroughs. It is possible that Murcod came from Ballagh, a place that still survives as a townland, located in Adamstown parish, county Wexford. (Only a couple of miles from where my Mother was born, incidentally.) However, it's far more likely that his name references a physical attribute. The Gaelic Irish were big into descriptive names (and it was a habit adopted by some of the English colonists too). Ballagh possibly means freckled or speckled, and as someone who was called freckle-face as a child I can totally relate. Additionally, Colmán Ó Clabaigh has speculated that it might mean stammerer. (Thanks to Seán Duffy and Adrian Martyn for these suggestions, which are much more likely than my placename theory!).

When Murcod Ballagh was killed in 1307, he was described as a felon. The Anglo-Irish annals reveal that David de Caunteton decapitated him. Since he was an outlaw, his captors had the right to execute him once they apprehended him, without going through any other legal process. Outlaws taken into custody could be beheaded. In fact, one of the reasons why beheading was a component of William Wallace's execution was because he was an outlaw at the time of his arrest. And Edward I hated him, that's important too.

Two years after Murcod's execution (I'm not entirely convinced it was an execution, but we'll call it that for now, while I figure it out), one of his killers, David de Caunteton, suffered the same fate. An examination of the justiciary rolls illustrates de Caunteton's journey from loyal Englishman to English rebel, and, eventually, the gallows. In January 1308, he received twelve marks, seven shillings and eight pence as a reward for his part in Murcod's death. (Calendar Justiciary Rolls, 1308-14, p. 22). Court records from April and July 1308, however, reveal that he was heavily in debt and his goods and property were taken into the king's hands. (Calendar Justiciary Rolls, 1308-14, pp 61, 106-7). This may have served as the catalyst that forced him into rebellion. Another court record reveals that Maurice de Caunteton, David's brother, and his accomplices, both English and Irish, had “openly put themselves at war against the King's standard,” and David was accused of receiving, that is giving aid, to his brother. (Calendar Justiciary Rolls, 1308-14, pp 146, 159) The justiciar, John Wogan, led an expedition against Maurice and his accomplices, and he was eventually hunted down and killed. David was captured and hanged on 13 November 1309 and this is recorded in the Chartularies of St. Mary's Abbey:

Item, on the feast of St Bricii, bishop, David de Caunteton is hanged, which is to be regretted. 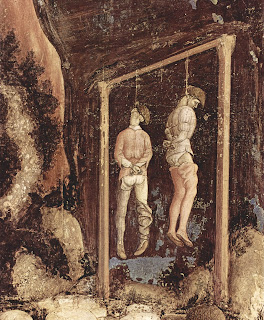 Ironically, Murcod Ballagh's relatives took advantage of this situation. Muiris MacMurrough, Murcod's father, was employed by the crown from 1310 onwards to guard the marches of Wexford. The pictorial depictions of Murcod Ballagh's “execution” are intriguing, but only prove that guillotine-like devices existed in the sixteenth century and, regrettably, they do not reveal anything about fourteenth century executions. An early prototype of the guillotine was used in Halifax, Yorkshire in the sixteenth century, and may date back to an earlier period, though there is no definitive evidence for this. Felons in Halifax were usually beheaded rather than hanged from at least the thirteenth century onwards. (J.C. Holt, Colonial England, 1066-1215 (London, 1997), pp 19-23).

Not medieval, but I get a kick out of this. Regent Morton, who was passing through Halifax on his way to Scotland was impressed with the guillotine and introduced it to Edinburgh, where it was known as the maiden and where he was eventually executed on it himself. As was the Earl of Argyll in 1685. He described it as the “sweetest maiden he had ever kissed.” Weirdo.

Aine
I'm a medieval historian. I completed my PhD on the royal manors of county Dublin during the late medieval period at Trinity College Dublin in 2010. My book The Royal Manors of medieval Co. Dublin: Crown & Community was published by Four Courts Press in 2013.